Hello everyone! Welcome to the Call of Leadership podcast. I am your host, Cliff Duvernois.

This is it! I finally got this podcast off the ground and we are full speed ahead!

Now you may be asking yourself, “Self, why should I care about this podcast?”

That’s a great question! But before I answer that question, let me share with you the genesis of this idea.

For me, this year is about growth. What can I do to grow in my mind, body, business and relationships. And while I have walked this path, God has laid upon my heart this recurring theme. What is that theme?

As I share this with people, I‘m amazed at how many leaders are in our community and in our state. Unsung heroes that work hard every day to make our world a bit brighter. Their stories are compelling and even inspiring.

One day, I wrote something down. Stronger leaders make for stronger communities.

So how can I help to make this true?

The answer would come from an unexpected source. Mr. Rogers.

I watched “Won’t you be my neighbor?”. The biopic of Mr. Rogers starring Tom Hanks.

The movie endeared itself into the nostalgic collective of anyone who grew up in front of a TV. Every day, Mr. Fred Rogers opened the door of imagination and taught us how to be kind to one another.

But before this national treasure was created, Fred Rogers was a music major. After college graduation, he would join the seminary.

One day, during his senior year of college, he walked through the door of his parents home.

There, in the living room, was something he had never seen before. A television. On the screen, two guys threw pies into each others faces.

Like a bolt from the blue, he knew this could be so much more. Something to inspire and empower others.

He said to himself, “This could be a wonderful tool for education! Why isn’t it being used this way?”

He put his plans on hold for seminary school. He applied, and was accepted, into NBC.

It would take a few more years, and a few more maneuvers, before Mr. Rogers Neighborhood debuted on PBS.

The results speak for itself. In the 2019 movie, one scene stands out.

Mr. Rogers boards a train. With him, a reporter assigned to write a story on him. The other passengers, recognize Mr. Rogers, whisper to each other. Pointing at him.

Before long, someone starts singing. Soon, everyone on the car joins in, singing a song we all know …

Mr Rogers said, “It’s not so much what we have in this life that matters. It’s what we do with what we have.”

With his show, for over 30 years, Mr. Rogers impacted millions of children and their parents.

Mr. Rogers saw that television oh so long ago. He felt the call of leadership.

After the movie ended, that evening I laid in bed and stared at the ceiling. I thought about the example that he set, the millions that he impacted.

I thought back to the first time I could remember having an impact on someone.

It was back in the early 80’s. When I was 11, maybe 12 … my mom ran a day-care, baby sitting service out of our home to make extra money.  One boy who was under my mom’s care, Tom, was a few years younger than me.

An hour before he arrived, I shoveled my mom’s pancakes into my mouth. With it being a nice Saturday, I knew that us kids were going to be very active.

“You know,” mom quietly cut her pancake.  “Tom told his mom that when he gets older, he wants to be just like you.”

I stopped eating. Like me?  Seriously?  Why would any kid want to be like me?  If I even looked at a girl, she’d spray me with mace.  I sucked at sports.  Geek and Nerd were stapled to my forehead.  My mom replaced my whitey tightys every week because of the numerous atomic wedgies.

By the time Tom arrived, I forgot about what mom had said.

We all ran out to play. We explored the woods around us. Then we came up to a fence.

I spotted white knobs on the fence post. It was electric. An evil thought formed in my mind.

I turned to the smallest kid in our crew. “You said you had to pee. Go on the fence.”

The little kid stopped. His eyes narrow on mine.

He cocked his head, “Are you sure?”

“Go on,” I turned away, hiding my smile. “Or don’t go. We’ll be leaving shortly and we won’t be stopping.”

The kid stepped up, starting to unzip his pants.

I felt Tom’s eyes on me.

Then guilt hit me. So many kids had been mean to me and here I was being mean to this little kid. Worse, Tom observed what I was doing.

I couldn’t let this happen.

“Oh, I’m just kidding.” I padded the kid on the shoulder.  “See those white knobs on the post? That usually means it’s electric.”

The kid punched me in the arm.

The rest of us laughed.

For some reason, I felt I had to be better. That I had to be more. My actions were being judged. I hoped that Tom saw what I had done and learned from it.

Is it something I’m particularly proud of? No. It was a dark moment. Sometimes our best comes from within the darkest moments. In that moment, we remember that we still impact others.

I started thinking about other people I knew that, when in the darkest hours, made the decision to still try and bring out the best in themselves and in others.

Travis comes from my home town of Vassar Michigan. He always had this innate leadership quality to him. In all sports, growing up and into high school.

So when he joined the Army, it was no surprised that he quickly climbed the ranks.

He married Kelsey, had a daughter Chloe, they bought a house … To quote Travis from his book, Tough as they Come, “They were living the American Dream.”

During a tour in Afghanistan, while on patrol, Mills put his backpack down right on top of an IED. Improvised Explosive Device.

The explosion shattered his dream.

With the unrelenting pain, with the realization that this might be his new life, he hit his darkest hour. He hit rock bottom.

He wrote in his book, “I told the nurses that I just want to die.”

He tried to convince his wife to leave him. To find someone else.

He goes on to write, “I wanted her to leave me. I wouldn’t blame her if she did.”

But she didn’t leave him. In writing about the incident in her journal, Kelsey wrote “’Til Death Do Us Part.”

Travis’ resolve kicked into high gear. He focused on getting himself right. Not only physically but mentally. Learning how to walk again. Learning how to eat again. Those thousands of little tasks we take for granted.

He wrote a book. Which lead to an award winning movie.

On that long road to recovery, he received hundreds of requests for public speaking engagements, radio and television interviews like on Fox News, all sharing his story with thousands of people.

But he wasn’t done.

Not by a long shot.

Because he felt he was able to contribute something more, to be more.

Now he was becoming a leader for his community.

But none of that would have happened without Travis first making that decision internally. Until he became a leader for himself.

Travis felt the call to leadership.

When I first heard Travis’ story, it inspired me.

But what could I do?

So I started writing.  Simple little stories that I could share.

Day after day, week after week.

Would anyone even like these stories? Or find them inspirational?

Then I got my first message.

Someone left a comment on my post “Cliff, I really love your writing.  It really inspires me!  Keep it up!”

OK so maybe that was just a fluke.  But I kept writing my stories to inspire people to be better.

Then more and more messages came in.

But I was limited. My stories would only reach a few hundred people.

Travi’s story inspired me to impact thousands maybe even millions of people.

I love stories. I love podcasting. More importantly, I felt that calling.
That’s the genesis of this podcast.

To find other leaders from our own back yard.  Whether they’re impacting one person or one million people.

My mission: find these leaders. Listen to their stories. Share them with you.

Because if you ever felt you wanted to be a better person, a better parent, a better spouse, contribute more to your community, build a service-based business …

If you ever felt you could be something more …

That feeling you have? That’s the call of leadership.

Is this podcast for you?

The better question to ask is …

Will you answer the call? 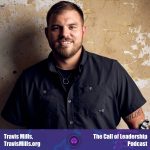 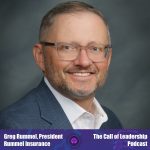 Meet One of the Men Helping Frankenmuth to Re-Open: Greg Rummel 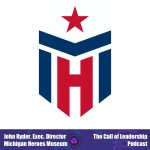 Saluting the Heroes of Michigan with John Ryder 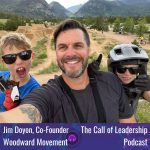 Ep 70: Living Life On Your Own Terms with Jim Doyon